All Capitals are Unequal, but in Business Some are More Unequal than Others 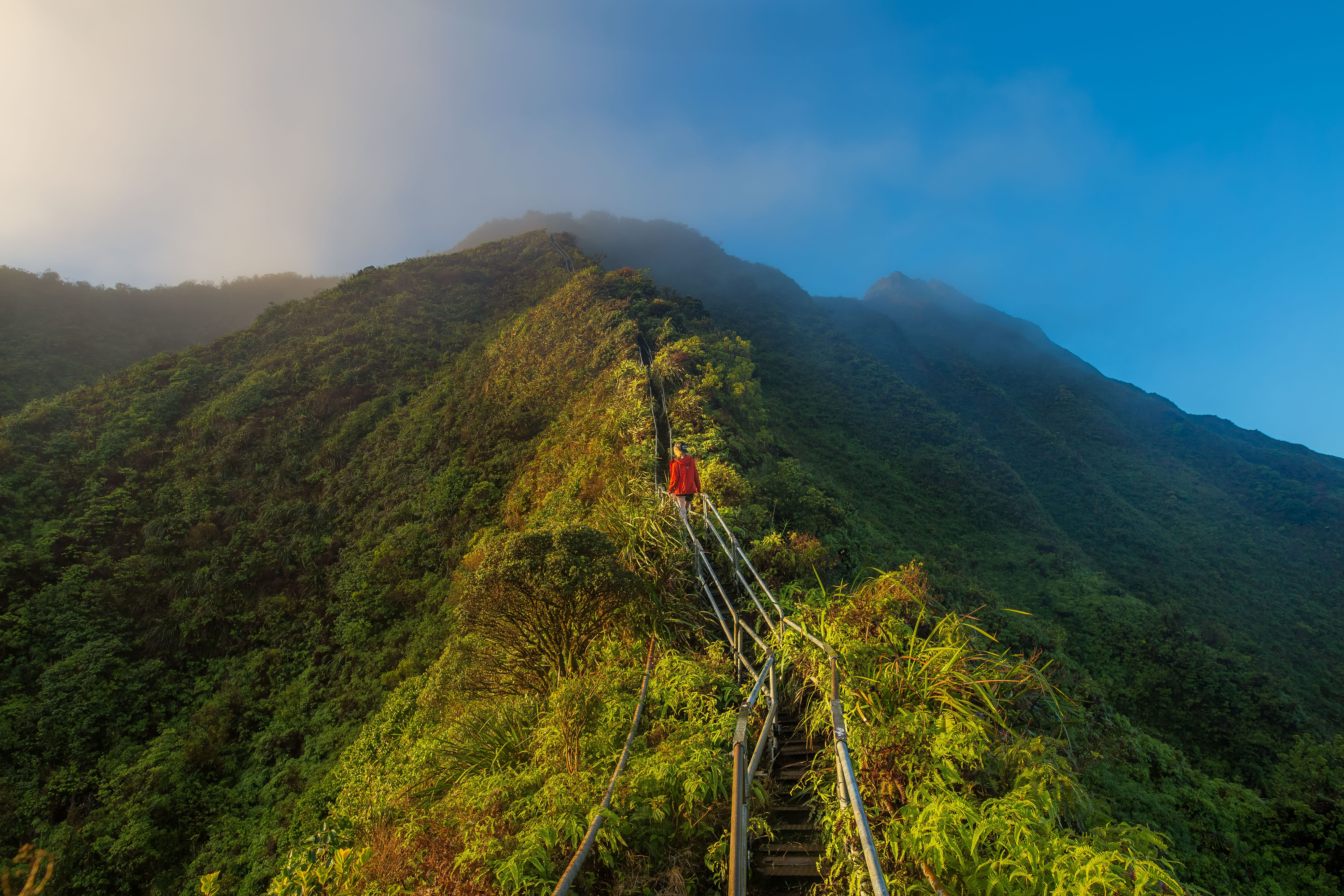 This article has been submitted as part of the Natural Capital Coalition‘s series of blogs on natural capital by Joss Tantram, Partner, Corporate Sustainability at Terrafiniti LLP

“All capitals are unequal, but some are more unequal than others”. This paraphrase of George Orwell’s famous line sums up one of the challenges related to the concept of multiple capitals – the notion that there are actually range of sources of value (capitals) that give rise to economic and social benefits. However, current accounting and economic approaches, for the most part, recognise only one – financial capital.

The number of ‘additional’ capitals vary according to which model you look at. For instance Professor Paul Ekins (et al) suggested Four Capitals, Forum for the Future focuses upon 5, Jane Gleeson White suggests 6, though others consider there might be more – up to 8!

Given such diversity, the exact name and nature of the capitals proposed also vary, though most approaches feature the following capitals: natural, social, manufactured, human and financial.

However, all such approaches seek to achieve the same thing – to broaden our conception and consideration of what is valuable for delivering economic, social and ecological utility. In addition they call for these wider aspects to be placed at the heart of economics, accounting, corporate planning and decision making.

The multi capitals concept, and especially approaches to understanding, measuring and valuing natural capital, has been gaining ground in recent years. It has been particularly strongly grasped by the accountancy profession, to an extent by policy makers (building upon the idea of “Natural Capital Accounting“) and by initiatives seeking to relate such wider concepts of value to the activities of business, notably the Natural Capital Coalition (formerly known as the TEEB for Business Coalition) with its recently released Natural Capital Protocol.

A metaphor or a financial procedure?

Perhaps the most critical aspect of the concept is whether it is best understood as a metaphor, rather than as a concrete approach to accounting, useful to reinforce the fact that a sustainable world requires us to recognise a number of categories of value rather than a reductionist focus upon one – financial capital.

The danger of metaphors is that they don’t always travel well; they run the risk of not roaming very far before they are interpreted as a fact, not the reference to a fact.

The trouble with this understanding is that, firstly it ignores the fact that natural capital is a metaphor for understanding value, not a mechanism for determining price and secondly (and more importantly), price cannot be used to assess trade-offs when the trade-offs are between aspects of value with fundamental dependency relationships at their heart.

When one capital depends upon another – such as in the case of financial capital (and all others) deriving from natural capital – then reducing each to a number for the purposes of assessing trade-offs runs the risk of forgetting that they are not equal – that one can only exist with the continued presence and health of the other.

Fundamental dependencies indicate a value hierarchy. Using a comparable metric like money as a way to put things on a level playing field makes sense, but only up to a point. Such an approach would be fine if the things we were comparing were truly comparable. However, the environment is something we can’t do without. There is a dependency relationship. There is no money without human beings capable of inventing and using it. There are no human beings without food, air and water.

This diagram illustrates (in simple terms) the dependent relationships that capitals have upon each other. It also notes a series of “thresholds” for ecological, social and economic capitals. 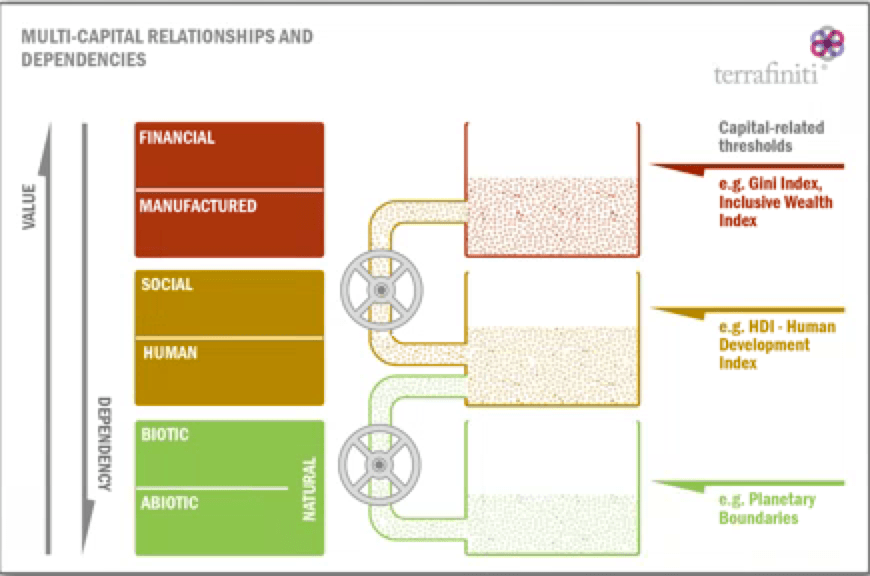 However the extent to which such additional concepts of value should be interpreted as literal price signals or more generally as telling us something which should be the subject of policy making (which may in turn give rise to price signals or changed market or investment rules which can be translated into price) is the subject of discussion and exploration at present within the worlds of accountancy,integrated reporting, business and policy making.

Can the capitals thrive without other, more fundamental, change?

Overshadowing all of the issues noted above is a much bigger question, can the capitals concept really be useful without wider change and reform of economics and capitalism?

This is a question which is increasingly being asked and increasingly not just by anti-capitalists and revolutionary thinkers, but by also economists and financial professionals. A notable example is John Fullerton of the Capital Institute, whoseRegenerative Economy is a suggested model for a different operating system for our economic activity.

Surely if we are to truly use the mechanisms of capital markets and international trading to deliver environmental and social good, then those markets need to be fundamentally reformed, such that they are capable of truly valuing a common future as more valuable than a private present.

Economics and markets must have both the incentive and capability to deliver the required strategic outcomes. They must rise to the challenge of valuing activities and behaviour which pay off over the long term, to compound rather than discount the value of a more sustainable future and to start valuing decisions that allow the growth and stability of ecosystems and societies as an outcome of advantage to the market as a whole.

The multiple capitals approach – as yet a journey not a destination

We are perhaps at the start of our journey to reform concepts of value. The capitals approach presents a vital topographical guide to the territory we must traverse. However, the route we will take remains uncertain and our ability to successfully reach a sustainable destination, in the time we might have available, also remains in question.

Resolving the tension between the way we do business and the way our planet works, so that growth in economic activity does not undermine the potential for future growth is a significant challenge. Approaches to conceptualising additional sources of value in terms of multiple capitals, and specifically tools which to help companies understand their dependencies upon the most fundamental source of all value, natural capital are vital. The Natural Capital Protocol is an essential tool at a vital time.