In December 2016, during Conference of Parties (COP) 13 of the Convention on Biological Diversity (CBD), the ministers of the Mexican Secretary of Environment and Natural Resources and the Secretary of Agriculture, Livestock, Rural Development and Food agreed to sign an unprecedented agreement to stop the advance of agriculture and livestock on forest resources.

The initiative led to modifications to the General Law of Sustainable Forest Development, as well as a detailed mapping exercise which identified forested ecosystems across Mexico.

The Secretary of Environment and Natural Resources (SEMARNAT ), particularly the Minister’s office, has been the leader of this project, seeking coordination with the Secretary of Agriculture, Livestock,  Rural Development and Food (SAGARPA). Both institutions are ministries of the Federal Government of Mexico.

In December 2016, during Conference of Parties (COP) 13 of the Convention on Biological Diversity (CBD), the ministers of both Secretaries agreed to sign an unprecedented agreement to stop the advance of agriculture and livestock on forest resources. This is in response to the need to transverse the issue of biodiversity in the productive sectors. This would help the country to achieve the national goal of 0% deforestation by the year 2030 (included in the Intended Nationally Determined Contribution submitted by Mexico to the United Nations Framework on Climate Change (UNFCCC).

The scope of the agreement between both ministries was to carry out actions within the scope of their respective competences to stabilize the agricultural and forestry frontiers. For this a technical group and a group of legal works would be formed.

What was the role of the Government?

This project was an initiative of the Mexican Federal Government, seeking to align the policies, in such a way that the agricultural policies were not against the environmental policies of management and conservation. Never in the Mexican government had such a commitment and such relevant results been demonstrated in favor of an integral management of the territory and the conservation of biodiversity.

1) Modifications to the General Law of Sustainable Forest Development to include an article that prevents the Secretary of Agriculture, Livestock,  Rural Development and Food (SAGARPA) from granting economic support or incentives for agricultural activities in deforested areas or for those that favor the change of land use of forest lands or increase the agricultural frontier (Article 24). Available here.

2) An Inter-ministerial Agreement published in the Official Gazette of the Federation that describes the mechanism to be followed when agricultural incentives are granted, so that it is previously consulted whether it is an area of ​​environmental importance. Available here.

3) Map of Land Cover of the Mexican Republic. The Secretary of Environment and Natural Resources (SEMARNAT) generates, with the help of the highest technology, a map of coverage with a very precise scale to be able to identify with greater certainty where the forest ecosystems of the country are located.

4) Consultation platform. The Secretary of Environment and Natural Resources (SEMARNAT) granted resources to design an electronic platform that may be available in each of the Secretary of Agriculture, Livestock,  Rural Development and Food (SAGARPA) offices that receive requests for agricultural incentives.

It is necessary to finish the officialization process of the “coverage map” and the development of the consultation platform and possible updates of the coverage map. To outreach new decision-makers on the importance of this project for the change of government that will take place in Mexico in December of 2018. 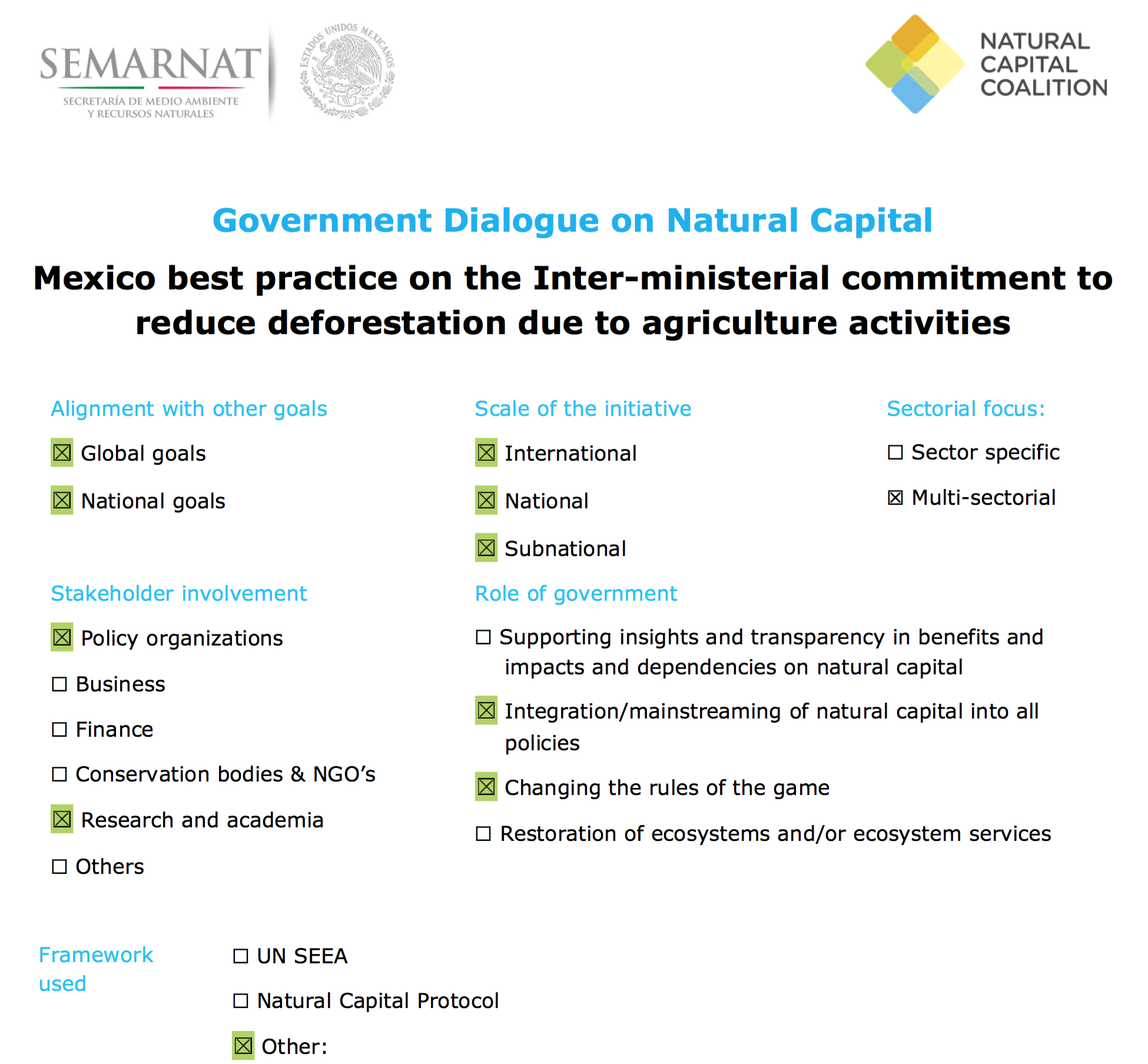 How To Develop Practical Guidance on Nature and Biodiversity for SMEs in the Agri-Food Sector?

Nature at the Heart of a Global Circular Bioeconomy