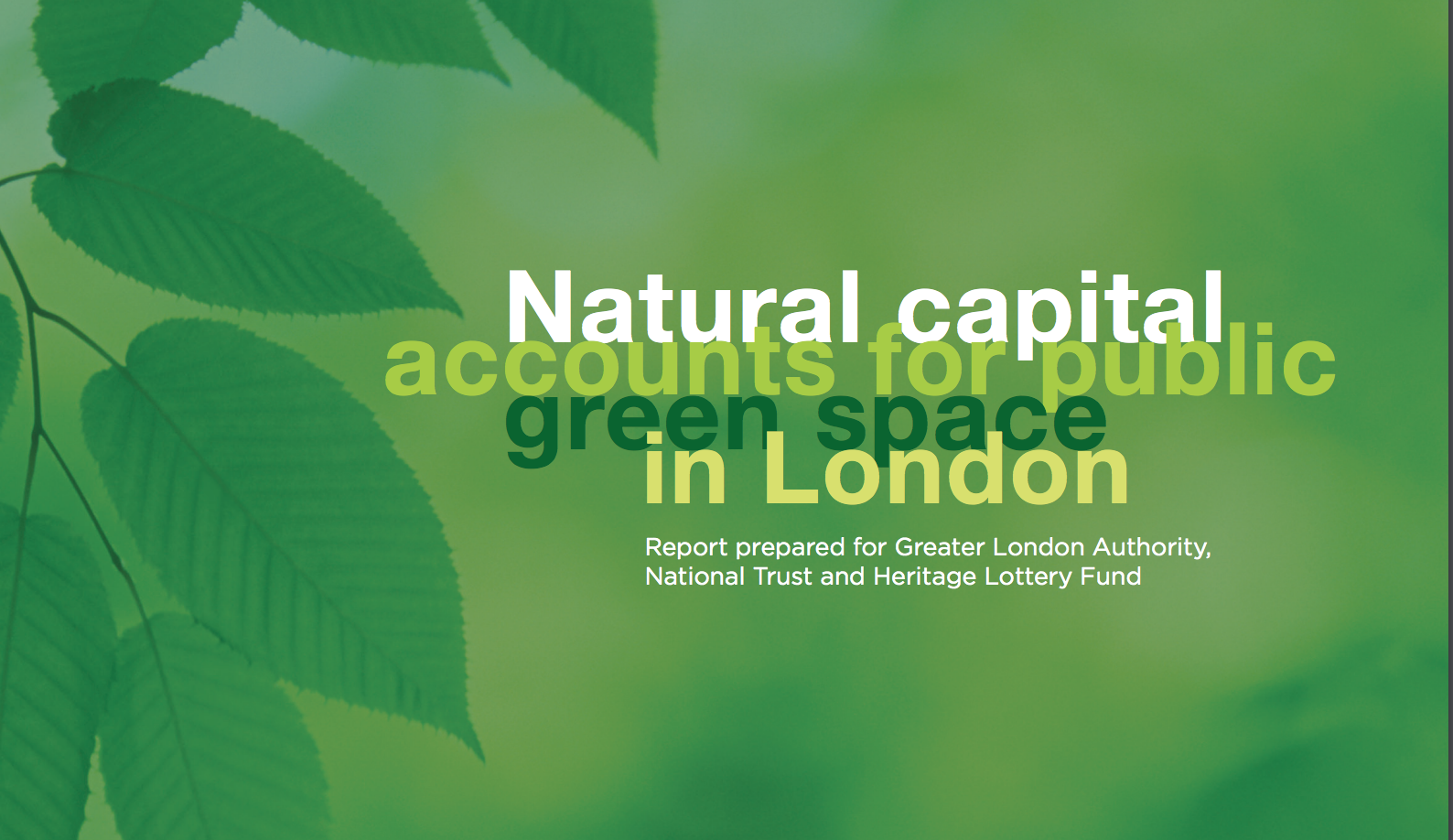 This report was prepared for the Greater London Authority, the National Trust and the Heritage Lottery Fund.

“Context: Londoners live in one of the greenest cities of its size in the world. They have access to an extensive network of public parks and green spaces, though this access varies locally. A greater understanding of the services and benefits that Londoners now enjoy from their public parks and green spaces will help to inform their future management.

Most of these are owned or managed by the London boroughs, other public agencies (such as The Royal Parks and Lea Valley Regional Park Authority) or environmental organisations, many of which are supported by grants or contracts from local authorities. However, with constraints on public funding, many are struggling to invest in, and maintain, public green spaces. Thus, it has become a priority to make the best use of precious resources, a public discussion which this study’s findings inform.

Into this debate, the report highlights the enormous economic value and benefits provided by public parks and green spaces. It provides a compelling narrative and evidence base for maintaining, or even increasing, investment in London’s public green spaces and motivates policy-makers and decision-makers to explore new sustainable models for funding or financing the provision and maintenance of public parks.

London’s public parks have a gross asset value in excess of £91 billion. This represents 30 years of value at £5 billion a year, appropriately discounted. The value of parks reflects their general amenity, benefit to health and opportunity for exercise, and the value of recreation. Individuals, public services and businesses all benefit from public parks across the city. The composition of these benefits is shown in Table 1 by benefit type as well by beneficiary. Residents of London are the principal beneficiaries. In addition to this total value, it also helps us understand their value for money.

For each £1 spent by local authorities and their partners on public parks, Londoners enjoy at least £27 in value. This investment is exceptional value for money, ensuring that London and Londoners benefit enormously from the city’s network of public parks. With such exceptional value, it makes sense to take care of the amount and quality of parks.

The economic benefits from parks are not spread equally across or within London’s boroughs. Some parts of London benefit from having plentiful green spaces, whilst others are lacking in this important resource. This results in important inequalities of opportunities for leisure and health outcomes. Taking this into account, future investments can be targeted spatially to correct this inequality. The act of valuation helps to highlight these inequalities.

Londoners avoid £950 million per year in health costs due to public parks. Public parks create opportunities for people to exercise, socialise, relax and enjoy being part of their community. In doing so, people improve their physical and mental health. This total avoided cost is made up of £580 million per year by being in better physical health and £370 million per year by being in better mental health. The health benefits of London’s public parks amount to 20 per cent of their total economic value. In recent years, the importance of parks for health has been receiving attention, particularly for important disease classes where exercise matters, such as heart disease and diabetes. Here, the emphasis is similarly on mental health, which deserves equal attention.

People enjoy the benefits of the services provided by public parks and this is reflected in the amount they are willing to pay to live close to them. It is estimated that for the average household in London, the value of proximity to parks is over £900 per year. This is in addition to the other types of benefits households enjoy, which, as one would expect, shows that parks are not only delivering value through recreation and relieving disease but also because of its impact on general quality of life.

Public parks supply other services too, such as temperature regulation and carbon storage. Green spaces in urban areas counter higher temperatures in summer months that can lead to ill health. Natural and semi-natural parkland also provide global benefits as a store of carbon in soil and trees. These are smaller sources of economic value compared to those described above.

One fifth of the area of Greater London is designated as publicly accessible parks. Public parks are defined as areas in Greater London that are free to enter and use. This includes local and regional parks, woodlands, sports fields and children’s play areas. Other green areas, such as private gardens, farmland and private sports fields and golf courses are not included in the study. The value of public parks is estimated for each of Greater London’s 33 boroughs. Policy makers and residents can access information on the value of public parks at the local level to understand where and how parks provide economic value.

All these estimates are based on a number of assumptions about the effects that urban parks have on Londoners and their preferences. The work highlights the need for more comprehensive data on the number of people using parks, a greater understanding of the activities people engage in, and of differences in participation across socio-economic groups.

The term ‘economic value’ refers to some of the benefits that people enjoy. These benefits, when represented in monetary terms, give policy makers and the public a better understanding for making decisions about park management and funding. The value of these parks is almost certainly greater than the figures reported here, since these estimates do not cover all aspects of wellbeing, nor intrinsic value…”

Read on and access the full report at: London.gov.