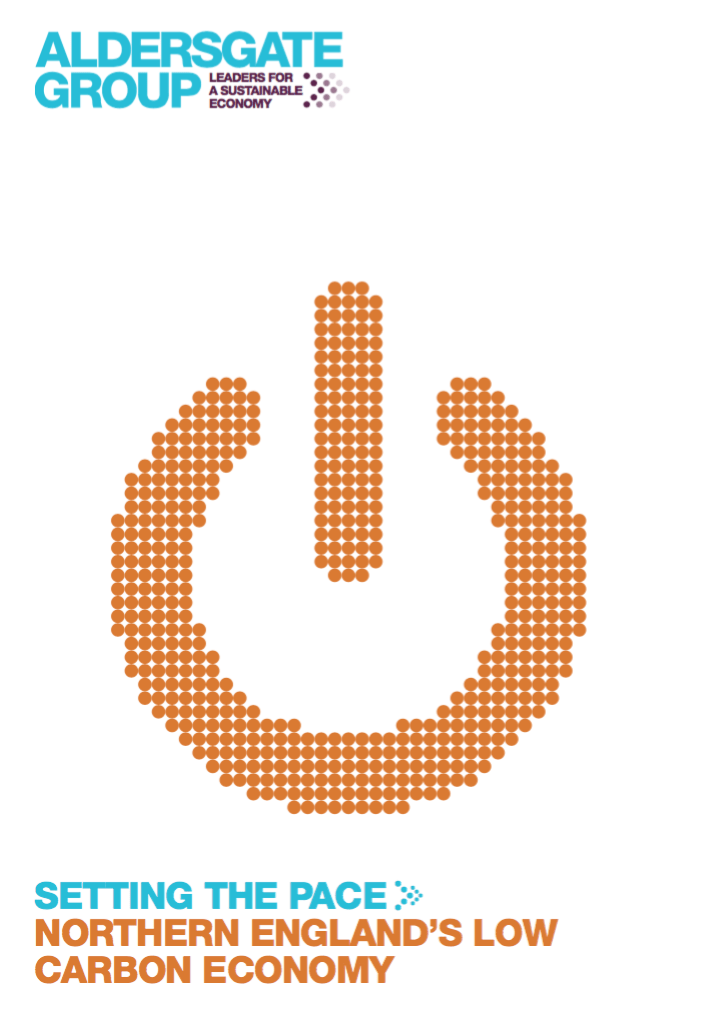 A new report from the Aldersgate Group out today, Setting the pace: Northern England’s low carbon economy, shows how low carbon projects in the North of England are contributing to increased economic activity in the region. Supporting the continued growth of the North’s low carbon economy should be a priority for national and regional government.

The report explores how low carbon investment is already creating jobs and developing supply chains, generating clean energy, protecting infrastructure and supporting skills development and innovation in the region. It also shows that the low carbon economy could deliver greater levels of growth to the region in the future. The report features a range of low carbon projects across the North, including a cluster of low carbon investment in Hull from Siemens, Associated British Ports and DONG Energy, shared emission reduction infrastructure creating a low emission industrial zone in the Tees Valley, and peatland restoration by Yorkshire Water in the Pennines.

Regeneration in the North has focused upon improved transport links through the Northern Powerhouse agenda, City and Growth deals and devolution deals. However, the Aldersgate Group argues that supporting the continued growth of the green economy also has a key role to play.

The report points to the 136,000 jobs in the North which have already been created by the low carbon sector.[1] It argues that, while businesses are already investing in low carbon projects, the extent to which the low carbon economy bolsters growth in the North could become even more meaningful in the coming years with reinforced support at both the national and regional levels.

Joan Walley, Chair of the Aldersgate Group, said: “We’ve seen from the great case studies in this report that the low carbon economy is supporting economic growth in the North of England as well as helping deliver the UK’s climate change targets. Both national government and devolved local authorities should build on these successes and continue to champion investment into low carbon infrastructure in the North so that it can continue setting the pace.”

Brent Cheshire, UK Country Chairman at DONG Energy said: “We are beginning to see the benefits of sustained investment in renewable energy in the North of England. It is not only helping to regenerate communities which have lost their traditional industries, but building a robust supply chain and attracting international manufacturers to locate plants in the UK.”

Matthew Knight, Director of Strategy and Government Affairs at Siemens said: ““The world must decarbonise, the question is not ‘if’ but ‘when’.  The most jobs will go to those countries who get their act together first.  A clear low carbon industrial strategy now will help Britain grow its manufacturing base and become a major exporter of low carbon technologies such as offshore wind.”

In this report, the Aldersgate Group sets out some key recommendations for government to support the green engine of the Northern Powerhouse:

Restoring Soils Could Remove up to ‘5.5bn Tonnes’ of Greenhouse Gases Every Year

Copepods: The Unsung Heroes of the Ocean

‘Death By A Thousand Cuts’: Vast Expanse of Rainforest Lost in 2018

Marine Animals Store Carbon in the Ocean – Could Protecting Them Help To Slow Climate Change?

Rescuing Forests From the Carbon Trap

Study: Climate Tipping Point Could Be Coming Sooner Than We Think

Could Sewage Treatment Help to Remove Carbon from the Atmosphere?